All the below content has been written by Dr. Sandip Sachar.

At Sachar Dental NYC, we only use digital x-rays.

Dental x-rays are an important tool used by dentists in order to make diagnoses of pathologies of the teeth, gums and mouth.  Dental x-rays allow the dentists to see things that they cannot see in clinical examination such as between the teeth, under the gums, the bones, and the root of the tooth. Pathology that can be seen on x-ray, sometimes cannot be seen during a clinical examination.  The information obtained from a dental x-ray is used to guide the treatment plan.  Without x-rays, problems can go undetected and untreated. 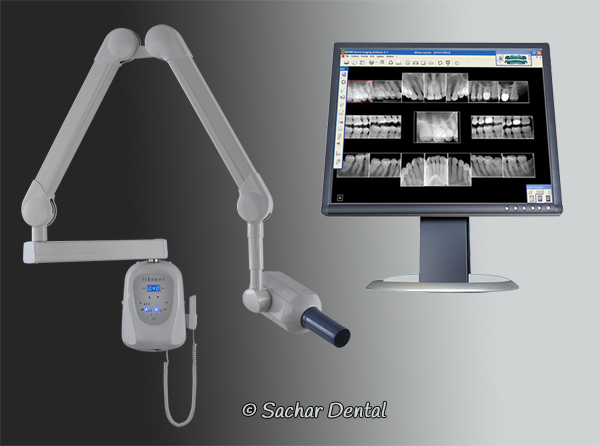 Digital dental x-rays are very similar to traditional x-rays, however, new digital technology replaces x-ray film with an electronic sensor that produces an x-ray image, allowing the use of less radiation.

In a traditional dental x-ray, radiation is generated, and angled into the mouth. A small section of x-ray film is positioned behind the area of the mouth in question. When the x-rays pass through the teeth, gums and bone, some of the radiation is absorbed. Depending on the density of the tissue being imaged, determines how much of the x-rays are absorbed.

There are many advantages of using digital x-rays versus traditional x-rays:

When compared to traditional x-rays, digital x-rays produce a much higher resolution picture.  This allows a dentist to see much more detail, and identify smaller pathologies that are hard to see in traditional x-rays.  This also allows the dentists to catch smaller problems earlier.  For example, identifying tooth decay and a cavity early can prevent a much larger cavity from forming, and the need for more invasive procedures.

Another advantage of digital x-rays versus traditional x-rays, is that they are better as a diagnostic tool for dental professionals.  With a digital x-ray, the x-ray picture is displayed on a computer monitor instead of on a film.  With a traditional x-ray film, the dentist would hold the developed x-ray film up to a light box, and look through the film to identify the pathologies.  With the digital x-ray, the images reviewed on a high-resolution computer monitor. With a digital x-ray, on a computer screen, this image can be manipulated and enhanced to more easily make a diagnosis.  The dentist is able to zoom in and out on the image.  The dentist is easily able to change the contrast of light and dark of the image to more easily see abnormalities and make a diagnosis.

Digital x-rays also allow the dentists to measure on the computer screen with much greater certainty than on a traditional film x-ray.  With a traditional x-ray film, one does not know how much magnification has been achieved, thus making it hard to measure exactly.  On a digital x-ray, the computer is able to identify and measure structures to a much greater certainty.

Also, with digital x-rays, the dentist can much more easily compare old x-rays to newer x-rays by placing them simultaneously next of each other on the screen.  The dentist can place multiple x-rays next to each other on the computer screen, and arrange them in any order directly adjacent, to compare previous pathologies to new pathologies. This more easily allows us to establish and identify a trend, or change in the pathology over time.

Another advantage of digital x-rays is that they are much easier to share between healthcare professionals.  A digital x-ray can easily be shared between doctors within a practice, with other doctors outside the practice, and sent to the patient to take to another doctor.  Digital x-rays can be sent electronically as easily as any photograph can be sent. This includes sharing by email and text messaging.  Often, we send digital x-rays to specialists that we refer patients to for consultations.

Digital x-rays can also easily be printed on any printer.  This also makes it easier to share inflammation between doctors and patients.

Another advantage of digital x-rays, is that they eliminate the need for chemicals that are used to develop traditional radiographic films.  These chemicals are harmful to the environment and difficult, as well as expensive, to remove from a practice, and safely eliminate them.

Is there a difference in radiation exposure with digital dental x-rays vs traditional x-rays?

Additionally, less radiation exposure is achieved by reducing the need to repeat x-rays among specialists and other healthcare professional referrals.  X-rays can be sent by email and text message as well as printed on paper to share rather than shooting new x-rays by each doctor.

Is there a difference in the ability to see pathologies in a digital dental x-ray vs a traditional x-ray?

The high-resolution of digital x-rays as compared to traditional x-rays, allow the dentists to see smaller pathologies more easily.  For example, it easy to see an abscess or cyst within the soft tissues.  It is also easier to see bone loss.  Also, the diagnosis of cancerous and noncancerous masses or tumors are more easily seen.

With the ability to zoom in, we can also see small areas more easily that were difficult or impossible to see with traditional x-ray. For example, very small areas of decay between the teeth can now be identified.  With the ability to draw on the x-rays, we are able to identify and compare problems with poor tooth and tooth root alignment.  We also are able to see high-resolution problems inside the tooth, or below the gum line.  With all these advantages, it is much easier to identify pathology in the early stages, allowing for earlier treatment, less invasive procedures, less costly procedures, and less unnecessary discomfort for the patient.

How do we perform a digital dental x-ray?

The process of taking a digital x-ray is very similar to taking a traditional x-ray. A dentist, or dental hygienist will place a small rectangular sensor in your mouth with a plastic positioning device. He or she will ask you to bite down on the positioning device in order to hold the sensor in place.

They will next position the x-ray generator next to the area in question, aimed toward the image sensor. In less than a second, x-rays are produced that travel through the skin, soft tissues, bones and teeth and strike the x-ray sensor. The computer is able to generate an image based on how much of the radiation travels through the tissues, and reaches the sensor. The harder and more dense the tissues are, the more radiation that is absorbed, and does not pass through. These areas look more white on the x-ray image.

With soft tissues and less dense tissues, more radiation passes through them striking the image sensor. These areas appear more black on the image. The computer is able to generate multiple shades of gray between the black-and-white, and that produces the actual image. This all takes place in a fraction of a second. Because the computer is so sensitive and so fast, the amount of radiation exposure is greatly reduced.

What are some of the main conditions that digital x-rays are superior at diagnosing?

The safety of dental x-rays.

With this said, at Sachar Dental NYC, we still try to reduce the amount of radiation exposure as much as possible. TheAmerican Dental Association (ADA) recommends taking x-rays twice per year.  At Sachar Dental NYC, our philosophy is to reduce the amount of radiation by taking x-rays only once per year for most patients.  For patients that have pathology, or are at higher risk of pathology, we take x-rays twice per year, or more when necessary.

An additional safety factor of using digital x-rays versus traditional x-rays, is in the process of developing the image.  With the digital dental x-ray, the images are produced immediately by a computer that measures the amount of radiation exposed to the sensor.  With traditional dental x-rays, a film is exposed to the radiation.  This film then goes through a development process using chemicals, similar to the way traditional photographic film used to be developed.  It is very similar to comparing a digital camera to a traditional film camera.  Without the need for toxic chemicals, the digital dental x-rays are much better for the environment.  This also reduces the chemical exposure of humans that develop traditional x-rays, clean the equipment and remove the chemical periodically.

An additional way we take x-rays more safely, is to utilize lead aprons and thyroid covers when shooting x-rays.  In dental x-rays, the x-rays are tightly focused to the area in question.  However, when x-rays strike any substance, they bounced off slightly called scatter radiation.  These x-rays that bounce off in different directions are of very low in energy.  Most of them, will not make it through clothing or skin. Even so, we place lead aprons over other parts of the body including the sensitive thyroid, in order to prevent any uptake of scatter radiation.

How often should I have dental x-rays?

In general, we shoot a full mouth series of dental x-rays for all new patients, unless they have had recent x-rays taken elsewhere that have been sent to our office.  This allows us to identify any pathologies that may not be seen on clinical examination.