All the below content has been written by Dr. Sandip Sachar.

There are two types of dental cleanings that we perform at Sachar Dental NYC. A regular dental cleaning is called “prophylaxis”.  It is performed every six months along with a regular dental checkup.  The other type of cleaning is a “deep cleaning”, also called “scaling and root planning”.  A deep cleaning is performed when we note when bacteria occur deeper than 3 mm within the gum pockets, indicating infection of the gums or periodontal disease. 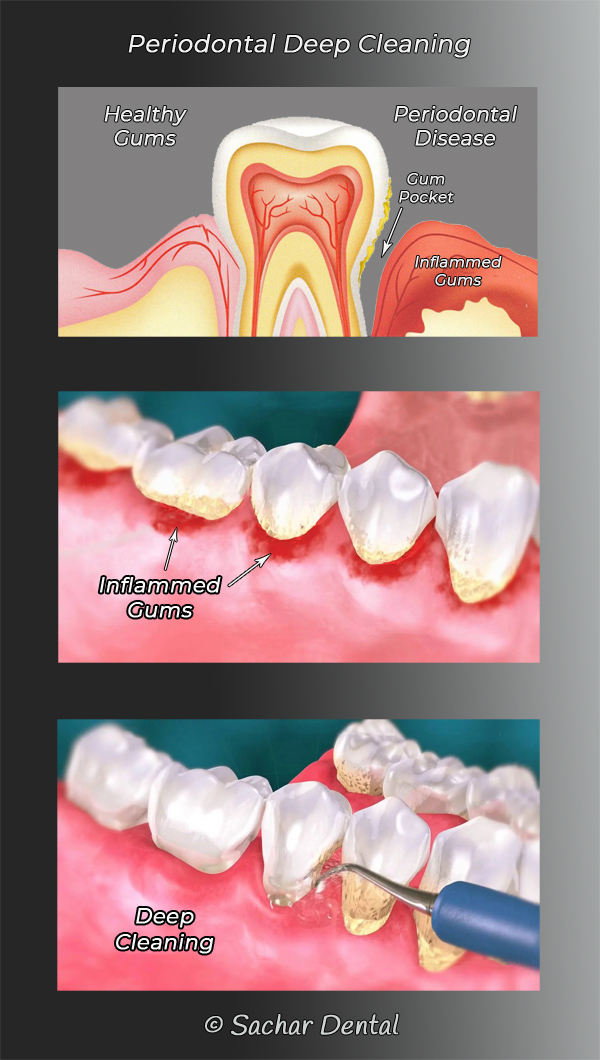 What is a deep cleaning?

The first step in a deep cleaning procedure is making the diagnosis of periodontal disease.  This is done through clinical examination and x-rays.  On clinical examination, if we note that the gum pockets are greater than 3 mm, periodontal disease is present and a deep cleaning is indicated.  A gum pocket is the space between the root of the tooth and the gums.

A deep cleaning differs from a regular dental cleaning in that it often requires local anesthesia in order to make it comfortable and pain-free for our patients.  This allows us to get deeper within the gums to remove bacteria, plaque and tartar.

For some patients, we may recommend antibiotic therapy in addition to a deep cleaning.  This utilizes a local injection of antibiotic deep within the gum pockets, performed at the end of the deep cleaning procedure.

The following is a list and description of terms one may hear when discussing deep dental cleanings.  In no particular order, it is important to understand these terms.

Tartar - Tartar is a hard substance found on and between the teeth that consists of food particles that have hardened over time and adhered to the tooth surface.  It also contained bacteria and will cause inflammation of the gums.  Tartar cannot be removed with a toothbrush nor floss alone.  This requires a professional dental cleaning to be removed with our instruments.

Calculus - Calculus is another name for Tartar.

Plaque - plaque is a light-colored, mushy substance that forms on and between the teeth.  A consists of food particles and bacteria and eventually will harden to Tartar.  While plaque can be removed with flossing and brushing, it usually accumulates in areas that are hard to get to with a toothbrush and floss.  Any plaque that remains after flossing and brushing will be removed in your professional dental cleaning.  Over time, plaque is responsible for causing tooth decay and gum inflammation.

Gingivitis - Gingivitis is a term for inflammation of the gums.  Inflammation of gums is caused by an accumulation of bacteria, plaque and tartar.  Normally, healthy gums do not bleed under while flossing and brushing.  Bleeding while flossing and brushing is a sign of gingivitis or infection of the gums.  Gingivitis is the first stage of gum disease also known as periodontal disease.  When treated early, periodontal or gum disease can be reversed.

Periodontitis - Periodontitis is a term for infection of the gums and bone.  This occurs when bacteria penetrates deep under the gums and starts to erode the bone that holds the roots of the teeth.  If diagnosed early, this can be treated and avoid the potential for erosion of bone and eventual loss of teeth.  Periodontitis is the number one cause of tooth loss.  Usually, periodontitis does not cause any pain and can be missed.  Therefore, it is very important to maintain a schedule of having a checkup every 6 months.

Gum pockets - A gum pocket is the space between the root of the tooth and the gum.  Normally it is not deeper than 3 mm in healthy gums.  When bacteria get inside, it can become deeper than 3 mm.  This allows bacteria to harbor under the gums and cause gum disease or periodontal disease.

Prophylaxis - Prophylaxis is another word for dental cleaning.  A cleaning is a prevention to prevent gum diseases and tooth decay.

Scaler - a scaler is a dental instrument that is utilized to scrape plaque and tartar off of the teeth and from between them.  It is also utilized to remove plaque from under the gums.

Cavitron - A Cavitron is a medical device that is used to assisting in cleaning teeth.  It utilizes ultrasonic scalers with high-pressure water to remove plaque and tartar from teeth and between them.  It also gently flushes under the gums.

Prophy paste - Prophy paste is the polishing powder that is utilized to remove staining from the teeth.  It is applied with a high-speed spinning brush.

When would I need a deep cleaning?

How is a deep cleaning done?

A deep cleaning is performed by our dental hygienists and our dentists, or occasionally by our periodontal specialist. At Sachar Dental NYC, our dental experts will decide how many visits are necessary for your deep cleaning.  It ranges from 1 to 4 visits.  For patients that require more than one visit, we will do a deep cleaning in sections, or quadrants of the mouth.

The first part of a deep cleaning procedure is to achieve local anesthesia.  This enables us to clean deep in the gum pockets while remaining comfortable for our patients.  Once we have achieved local anesthesia, we will start to remove all bacteria, plaque and tartar from under the gums and around the teeth.

We will determine if an additional injection of antibiotics is necessary.  This antibiotic treatment is called Arestin and it is a specialized type of antibiotic that was specificly designed for bacteria that cause gum disease.  It works very well to kill bacteria under the gums and around the teeth.

What is the difference between a deep cleaning and a regular dental cleaning?

What happens after a deep cleaning?

How much time does a deep cleaning take?

How much does a deep cleaning cost in New York City?

Does my dental insurance cover the cost of a deep cleaning?

Most PPO dental insurance plans cover a deep cleaning at 80%. After a deep cleaning, we recommend patients come in every 3 months, or 4 times a year for their regular professional dental cleanings. Most dental insurances will cover the cost of cleanings up to 4 times per year at 100% after a deep cleaning, and the diagnosis of periodontal disease. At Sachar Dental NYC, we will submit the billing claim for your deep cleaning directly to the insurance company, and get paid directly from them. We will check with your insurance company prior to your visit and let you know what your out-of-pocket expenses are. For most patients, you will only be responsible for your percentage at the time of your visit.

Can I use flexible spending dollars or a medical savings account for these charges?

Yes, you may be able to use your medical savings accounts or flexible spending dollars to cover charges related to your Invisalign treatment. At the time of your service, we will provide you with all the necessary documentation and receipts.

Do you offer payment plans for deep cleanings?

At Sachar Dental NYC, we offer interest free financing through Lending Club and Care Credit. In 15 minutes, we will let you know if you are approved for interest-free financing. These options will enable you to make payments over the next 12-18 months without any interest charged.

Why are we the best dentists in NYC for a deep cleaning?

We spend an extensive amount of time educating our patients on proper home oral hygiene in order to prevent periodontal disease before it starts.  Our dental hygienists, and our dentists, are all compassionate, empathetic and they have excellent bedside manner.